Your buddy is tipsy. Would you rather express this with a gesture referencing an 18th-century alcoholic carpenter’s tzar-given neck tattoo, or just mime tipping a bottle to your lips? Almost invariably, Russian gestures are more interesting and/or emphatic than their international counterparts. We suggest that the following be immediately adopted into everyone’s physical vocabularies, whether or not accompanied they’re by the Russian language itself.

Once, the story goes, there was a drunken carpenter, or maybe shipbuilder. In any case, he somehow rendered a service for Peter the Great, who was so grateful that he granted the man a certificate entitling him to free vodka for life, anywhere in the tsardom. Such a certificate can but be immediately lost on a drunken bender, and so soon enough the tsar, presumably on a break from wars of conquest, or torturing and murdering his own family, replaced the carpenter’s coupon for free booze. After a few more copies were lost, Peter finally had his seal tattooed directly onto the carpenter’s neck. From then on, the man could simply enter a tavern, tap at his neck, and be served. And so to this day Russians —and those who drink with Russians — tap our necks to indicate that we’re drunk, or someone else is drunk, or that drinking is about to happen.

Watching Russians count on their fingers really makes you feel like you’ve fallen through the looking glass. If I’ve been counting in the photo below, what number would you suppose I’m at? 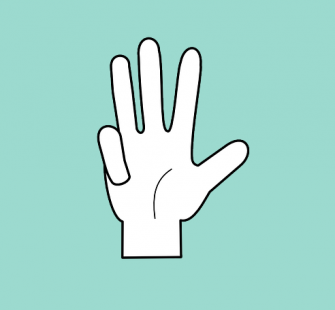 If you said ‘one’ you presumably attended grammar school somewhere in Russia or the former Soviet bloc. Russians continue by successively folding their fingers into their fist as they count upwards. ‘Isn’t that how everyone does it?’ a Russian friend once asked me. See here for a complete Russian counting lesson in gestures.

If someone requests an outrageously undeserved bribe, here’s your answer. Make a fist with your thumb poking out between your index and middle fingers. You’re not getting anything from me, the gesture declares (“не получишь ты от меня ничего“). It can be used anytime you want to refuse somebody something, though be careful, as it is a bit rude. It is used in other Slavic lands as well.

More emphatic and definitely cuter than the international shrug, Russians raise their shoulders and also spread their hands out wide from their bodies, palms forward.

The head scratch is another gesture that is simply more emphatic in Russian than its international counterpart. Russians don’t merely scratch, they loop one arm over the top of their heads to scratch the opposite side, typically the back part of the head or the ear.

This is a bit outdated, but fabulous. Beat your breast to show that you are an honorable person, or that you have the best idea to solve the problem at hand.

As in other lands, handshakes and kisses are common. But be careful to cross the threshold into a host’s home before performing these rituals, as to do otherwise is terrible luck. You will then, of course, put on the provided slippers and have some tea.

To indicate that someone (else, usually) is an idiot, fool, clown or crazy person, point to your head as in the photo and twist, as if dislodging a chunk of brains. Flick the brains away for extra effect.

Twisting out brains to indict someone for foolishness, from RussianPod101.

When you’ve finally come to understand something, slap your forehead with your open palm.

An outdated but recognized gesture is throwing one’s hat on the ground to show your resolve to finally solve the problem at hand.

While exceptions can be made, in general one does not smile or laugh as much when speaking Russian. Popular wisdom holds that smiling is for idiots. When visiting a world landmark, one can generally spot the groups of Russian tourists by how they pose for photos — the men leaning straight forward, vaguely menacingly; the women turned sideways, tits and asses out, without a trace of pleasure on their faces. (Young Americans, meanwhile, are generally shrieking and dry-humping each other.)

There’s a great Russian expression of improbability (similar to ‘when pigs fly’): “Это случится, когда кто-нибудь в троллейбусе улыбнется” — “That will happen when someone on the trolley smiles.”

THANKS/СПАСИБО: Thanks first to my Russian sources, including Anya, Daria and Sergey.