This article is a bit out of date!

We’ve been reviewing rolling travel backpacks for years, and so we were jazzed about the release of the Eagle Creek Expanse Convertible International Carry-On, and about comparing it to our favorite similar offering from Osprey, the Ozone Convertible 22″/50L.

Eagle Creek is a trusted and reliable manufacturer of quality gear, and is known for its great guarantee. We found the Eagle Creek Expanse Convertible International Carry-On to be another solid piece from them.

But we’ve hardly made it a secret that we think that the best rolling carry-on backpack is the Osprey Ozone Convertible 22in/50L Wheeled Luggage, and, after performing this comparison, our viewpoint hasn’t changed.

Eagle Creek’s wheeled backpack does have some points in its favor, however — especially price. For some, it may be just fine or even better.

We’ll start with an quick side-by-side look at these two bags and then discuss our thoughts a bit more fully below.

This article was originally published on Tuesday, July 3, 2018.

Some love the combo of rolling bags/backpacks, some don’t. Our take: they’re by far the best way to travel, and they’re almost always what we use ourselves.

The Osprey Ozone Convertible carries more stuff (50L if stuffed to the gills, compared to the Eagle Creek bag’s 30L). And Osprey’s combo carry-on features a detachable daypack, a feature that we think is indispensable for travel. The daypack can be reattached in a moment via zipper, which can save you on luggage fees for airlines that don’t allow a separate personal item along with your carry-on (often the case in Europe).

The one drawback we see with the Ozone Convertible 22″/50L is that if the daypack is overfull and zipped onto the main pack, the whole unit is prone to tipping. This can be avoided by looping the daypack over the pull handle and resting it on top, or by just carrying the daypack and rolling the main bag. Overall, this is a minor annoyance and doesn’t for a moment stop us from reaching for the Osprey Ozone when heading out on our world travels. 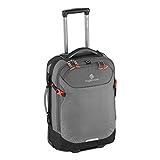 Eagle Creek Expanse Convertible International...
Check on Amazon
All that said, the Eagle Creek Expanse Convertible International Carry-On is also an excellently designed and lovely pick if you don’t need a daypack, or if you’re willing to buy one separately. Eagle Creek’s various daypacks generally come with a sleeve that allows them to slip over double pull handles while riding on top. There are also external lash points that you can use to hook on extra items via carabiners.

The Eagle Creek unit’s side and top straps do not feel as integrated into the body of the bag as Osprey’s; we don’t think they’ll break but they are more likely to stick out and snag on things. And the Eagle Creek bag shares Osprey’s tipping issue: slide a daypack over the pull handle and let go, and the unit may not stay upright.

The Eagle Creek Expanse Convertible International Carry-On is a bit small, even for the tastes of extremely light travellers like ourselves. Others who reviewed the Eagle Creek generally complain that it’s small size makes it only suitable for a several-days journey.

Both Osprey and Eagle Creek offer equally fantastic lifetime guarantees and have a relatively good track record with travellers for follow-through in that regard.

Here is each bag being opened up and turned about by salespeople, plus a look at their pockets and guts.

Wrap-Up: Which Convertible Backpack Is Better for You: Osprey’s or Eagle Creek’s?

Both are great choices. Prices vary widely over time on Osprey’s offering, but if you can afford it, it’s almost certainly the best choice. At the time of this writing, Osprey’s bag had come down quite a bit in price on Amazon; the most up-to-date daily pricing is shown in the boxes below. Also click over to Amazon to check the prices for different colors — sometimes prices vary enormously by color.

The Eagle Creek option remains a solid runner-up and a fine bag for most needs.

Osprey Ozone Convertible 22in/50L Wheeled Luggage
An extremely well-built and more-fully featured backpack/roller carry-on and our overall favorite in the category; has a detachable daypack, side drink pockets, an easy-access top pocket
Check on Amazon