I am not a super spy, with secrets to keep. But I also don’t really want to get my devices all gunked up with the viruses that governments are using to go after each other.

I recently dove into the research on the perils of using public USB charge points in airports, trains, buses, libraries, and other locations. And now I will never use one again, at least not without the precautions described below.

For most of the past decade — that is, as long as public USB outlets have been popping up all over — security researchers have been warning not to use them.

Documented possible lines of attack have come from multiple security experts and sources, including Symantec, Wall of Sheep at Defcon, and Krebs on Security.

The researchers have demonstrated how these attacks can lead to:

Government and business employees carrying sensitive data are regularly warned not to use public USB charge points, and also not to use others’ cables or of course USB drives found lying around.

How to Avoid Juice Jacking

The obvious remedy is simply don’t plug your device into public USB outlets. We have long recommended the two devices below in any case for most travellers as they are incredibly convenient for power on the go.

The charger that came with your phone or other device is fine — just don’t use an unknown cable.

If you’re travelling to a country with funky juice holes, you can be prepared for any of them with the universal power plug adapter that we recommend, below (and yes, we’ve tested out tons of them before deciding on this one). 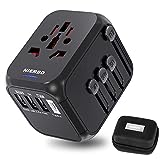 Nierbo Travel Adapter
Get three USB-A out and one USB-C out from a single device that plugs into any socket, anywhere. It also accepts one standard electric plug, from anywhere. The Nierbo takes 100-250V, has an auto-resetting fuse, and comes with a lifetime warranty.
Check on Amazon

On trains and planes you may not have a standard plug outlet, or any outlet at all for that matter, even the USB outlets that are the fraught subject of this article. But we’ve got a solution for that too; it’s a battery with a USB-C (and double standard USB-A) out that can fast-charge phones many times over.

If I’m going somewhere for a few days and there aren’t a lot of outlets around, I often end up just recharging my phone repeatedly from this battery and not even bothering to scrounge for an outlet. Even then, I’ll only use up half of its power. 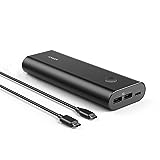 Anker PowerCore+ USB-C Battery
Charges up to three devices simultaneously, including one USB-C device, with a capacity of 20100 mAh. Charges phones, Macbooks, Chromebooks, and other devices compatible with its 5V/3A output.
Check on Amazon

A Final Option If You Really Want to Use USB Charge Points: The USB Condom

I don’t have a need for this since I use the devices above anyhow, but if you want something even smaller, or really love charging at USB points, this is the protective device for you. 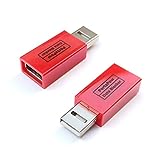 PortaPow 3rd Gen USB Data Blocker
This plug only allows power through, and no data. Charges at up to 2.4A, so fast charging is possible if the device, cable, and charging point allow it.
Check on Amazon