At this point we’ve spent decades on the road — as well as decades uncorking wine.  It was finally time to take a good hard look at our road uncorking options.

All too often we have wound up in some cheap tourist apartment, hostel, or campsite sans that most basic of basic necessities: the corkscrew. But carrying a corkscrew in our carry-on could run us afoul of the TSA / EU / etc. airport security.

Thus our complete guide to dealing with the ornery pieces of cork that can get between a thirsty traveller and a fine wine.

The best corkscrew for your carry-on is the True Utility TU 48 or Macupan Multi-Tool, (they’re the same, get whichever version is cheaper at the moment). It’s so simple and unassuming that even the most officious airport security personnel won’t try to steal from you. It’s also so small that you won’t think twice about keeping it in a carry-on, or for that matter a purse, wallet, or on a keychain. The tradeoff is that it doesn’t have a lever mechanism, so with a tougher cork you may end up putting the bottle between your knees as you pull. (We also detail fancier travel wine openers below, for those who want the easiest opening experience).

Do I Really Need a Travel Wine Opener?

Yes. Or do you want to always be resorting to the more savage, spilly ways of opening wine? Or worse, drink beer or water or something?

This Is the Best Travel Corkscrew: It’s Tiny, Non-Confiscatable, Effective

This cute, cheap little tool simply works. For an average bottle of wine, it does its job smoothly; a gentle tug and the cork pulls right out. If the cork is older or more firmly stuck for whatever reason, it may be necessary to put a dish towel over the handle when pulling up to provide padding for your fingers. But we’ve never had it fail to open a bottle of wine.

More importantly, we’ve found reports from various travel bloggers of the other travel corkscrew options failing. For example, Heels First Travel recommended the Boomerang saying that it is “unconfiscatable” but then later posted that she had it confiscated in Italy. Other commenters write of similar experiences with other travel corkscrews, especially in Europe. The main issue is that they all have some sort of sharp blade or corkscrew, and even if it’s short enough to be officially permissible it will sooner or later be blocked by security folks who aren’t clear on the specific rules and afraid to take the chance in letting something through that they shouldn’t (they are tested).

TSA rules for carry-ons state that multitools (like the Leatherman Juice CS3 we discuss below) with scissors having blades of less than 4 in. (10.16 cm.) are permitted, and corkscrews are allowed. Knives are not. EU cabin baggage rules say that sharp tools (blades, scissors) are allowed only up to 6 cm (2.362 in.). But these rules are still no guarantee, especially for world travel, and in the end individual, human, fallible security agents make the final call. Also, anything that looks like it may contain a blade (a corkscrew or a multitool) may trigger closer inspection. We prefer to glide through security unquestioned.

In our personal experience, the corkscrew we recommend is so small that it has never even been given a second glance at a variety of American, Canadian, and European airports (including in Italy), who if they even see it probably don’t understand what it is. Perhaps one day it will be 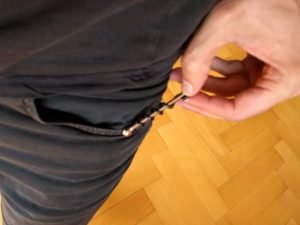 — a very creative interpretation of the prohibition on blades could be stretched to include this piece’s cute, twisted, metal spiral. But I’ve been carrying it through the world’s airports without issue for more than two years of constant nomadism as of this most recent update to this article. If it ever does get confiscated, I’ll post an update here.

UPDATE (December 2019): Gosh darn those officiously vigilant folks at Luton Airport! My little travel wine opener was recently confiscated at this airport and a reader in the comments seems to have reported the same, same place. A corkscrew is not specifically mentioned in the UK tool restrictions for hand luggage, plus it’s such a tiny tool that this is surprising. So I’d possibly avoid having this in luggage when leaving the UK especially Luton — and I know of no other option. Anyway, up to now it had flown worldwide with me without incident for years, and I’m already buying a new one.

Also since we recommend travelling with only a wheeled carry-on backpack, space is always a consideration. This corkscrew is the smallest we’ve found, even small enough to slip into a wallet. Generally I attach it to the keyring holder inside my Meridian daypack; such key holders are found in most other Osprey daypacks as well. We’re incredibly conservative packers, but we don’t ever hesitate to have this corkscrew along, just in case. 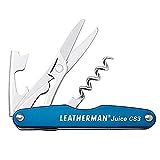 LEATHERMAN, Juice CS3 Multitool with Spring-Action...
Check on Amazon
We (and everyone else) love Leatherman multitools. They come with 25-year warranties that you will never need, because they’re so well made. I personally used one in the years I worked as a theater technician, and many other technicians of various stripes do as well; the tools are lovely pieces of design and last forever.

The Leatherman Juice CS3 is the only Leatherman that does not include a knife (which wouldn’t get your carry-on past airport security) but does include a corkscrew. It’s an incredibly handy tool for travel; in addition to the corkscrew that provides a leverage arm for a smoother pull, the Juice CS3 has a small scissors, a bottle opener, and a can opener.

As discussed above, this tool fits the requirements of both the TSA and the UE for cabin baggage, but it may get a second look from inspectors suspicious that it may contain a blade; and there are no guarantees that a less-informed security gate agent might block it. It’s an excellent tool; you’ll have to decide if you think it’s worth the risk.

If you’re always checking a bag, I highly recommend instead grabbing one of the more fully featured Leatherman Juice models, such as especially this Juice S2, which has the same features as the CS3 as well as scissors, a knife, and a number of other tools for performing quick fixes while travelling.

The Competition: Other Travel Wine Openers

There are a number of other travel options, none of which we feel handle the requirements of oeno-nomadism quite as elegantly as the two options above.

Munkees 3-in-1 Keychain Corkscrew is a cool compact integrated keychain with knife and corkscrew. But the knife blade is very unlikely to pass airport security. 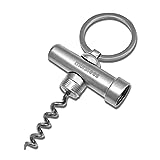 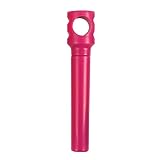 The KeyGear Multitool is very big (5.5 inches/14 cm) and contains a blade that wouldn’t get it past security. Also, even if you’re considering it for purely ground travel, at that size it couldn’t really be expected to function as a keychain as it is advertised. 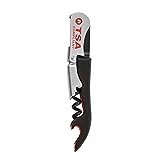 True Jetsetter Black Double Hinged TSA Compliant...
The Jetsetter TSA Compliant Corkscrew attempts to convince airport security to let itself through with big red wording “TSA approved” stamped on its side. Amazon reviewers say that this works out at American airports, but not at European ones. If you’re only checking luggage in America and don’t mind a slightly bulkier tool than our main pick, this tool is nice because the jointed arm gives you extra leverage.

If you really need a foil-cutter and you’re willing to risk your tool being confiscated, especially at European airports, you could get the Black Boomerang Corkscrew. It has a clever half-moon “non-blade” for foil-cutting.

How to Open Wine WITHOUT a Corkscrew in an Emergency 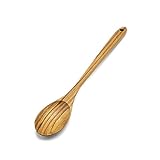 FAAY 13.5" Teak Cooking Spoon, Wooden Spoon,...
In our experience, the absolute best way to open a bottle of wine without a corkscrew is to force the cork into the bottle. This can be accomplished with cutlery, a key, a sturdy pen, and other long, slender rods, but the absolute best if you’re in a kitchen is to grab a wooden spoon.

Put the wine bottle in a sink and put a towel over the spoon as you force the cork into the bottle. Do this little by little; however, you’ll likely spill a bit of wine. In the years preceding my purchase of the tool we now recommend, I did it this way many times, and only had a bottle explode once.

The other, more ridiculous ways of opening wine without a corkscrew are not exactly convenient (this video suggests hammering in and pulling on a nail, and even adding pressure by inserting the tube of a bike pump).

Wrap-Up: The Best Corkscrew for Travel 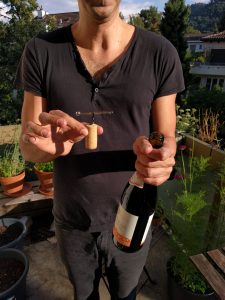 We think that the best solution for opening wine while on the road is the True Utility TU 48 or Macupan Multi-Tool. Just go for whichever of those three links has the best price at the moment, as the products are the same. 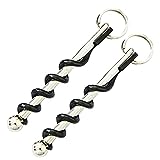 Leatherman Juice CS3
A more expensive and much nicer option, though there is a small risk of it being confiscated from carry-ons at airports, particularly in Europe.
Check on Amazon

If you’re flying out of the UK, it seems sadly possible that no wine-opening tool will pass muster at security. In that case I suggest making sure you have a one-way ticket and then buying a tool once arrived at your destination, so you can enjoy a life of better wine, and better wine opening.

A Lifesaver for the Tipsy Vagabond