I’d like to put my years of Brazilian bus travel to use and answer a few of the most common questions we get from travellers. I’m also including perspectives here from other travellers with extensive experience in Brazil, including some female travellers who were kind enough to lend their take.

1. How safe are Brazilian buses?

Brazilian buses should not be a cause of concern for travellers in terms of safety. Both the bus companies and the workers at the rodoviarias (bus stations) ensure a high level of safety, as they would be legally and financially responsible for issues that should come up. There are security checks before getting on buses, significant police presence at major bus stations, and intercity buses going between different states (such as São Paulo to Rio de Janeiro) always do document checks and register all travellers.

More anecdotally, while we know plenty of both Brazilians and gringos travelling in Brazil who have been robbed or pickpocketed at some point, we haven’t heard any stories of this or other safety issues on intercity Brazilian buses, nor have we had any problems ourselves. And while we see in travel forums the occasional story of pickpocketing on buses, generally this is on city buses, not long-distance buses.

It would seem that as common as robberies are in Brazil, they’re not all that common on intercity buses.

Brazilian buses tend to stop every three hours or so for a break, and most people will be getting on or off to stretch their legs. Nobody has ever messed with my stuff while I’m off the bus, but I do keep my valuables on my person just in case at rest stops, and would recommend you do likewise.

Just to be safe, see also a few more of our safety tips for Brazilian buses.

2. Are Brazilian buses safe at night?

Yes. As travellers (both men and women), we’ve found Brazilian buses to be perfectly safe and comfortable for overnight travel. One of the writers on this site admits to having felt a little bit of trepidation before her first overnight Brazilian bus trip as a solo female traveller, but she says that once she set off she felt quite safe with the experience itself, and didn’t feel at all unsafe.

We understand the concerns; with any luck you’ll sleep through most or all of an overnight trip and so you want to know that both you and your belongings are safe. It can help for piece of mind to travel with a daypack (a separate daypack or one that detaches from your main bag) that contains your valuables, and keep that with you in your seat under your arm or under your feet. This is one of the reasons that we definitely recommend the leito or semi-leito classes for overnight trips — they’re generally not that much more expensive and it’s nice to have the extra space and comfort.

Overnight buses stop every 3-4 hours, and if you’re taking an overnight bus it’s likely an interstate bus and thus one that’s required to check and record every passenger’s ID.

Generally everyone else on an overnight bus is also interested in sleeping, so it’s quiet and nobody makes any effort to hassle or talk anyone else up. If you do encounter such an issue, it’s fairly easy to shut this down with a loud, firm não (no), and if you still need help the other passengers and the bus staff will be sympathetic and assist.

3. Is it safe to check your bag on Brazilian buses?

While some travellers new to Brazil are understandably nervous to chuck their packs or suitcases under the bus, the system is actually well-controlled and is more comfortable and safer than trying to keep your bag with you at your seat.

You are generally asked to check bags that are larger than a carry-on. We’ve taken the rolling carry-on backpack that we recommend on a bus and it fit in the overhead bin and thus did not need to be checked, but for your own comfort you may wish to check your bag; there’s no charge for this.

While Brazilians don’t exactly line up in an orderly fashion to deposit and retrieve bags before and after the trip, the bus staff does carefully monitor the system by issuing a ticket for each bag. You must produce the matching ticket at the end of the trip and the bus staff will then retrieve your bag. The bus company is liable if anything should go wrong, so these checks are done carefully.

4. How can I buy Brazilian bus tickets online?

It used to be you’d have to go to the station to get the tickets you want; now you can get them online and that’s much easier — just don’t try to buy your tickets directly from the bus company if you’re not Brazilian, as those websites almost never work for those of us without a Brazilian credit card, address, and ID number (CPF).

I use ClickBus for my tickets and it’s what we’ve found to work the best, but it requires Portuguese. Another site that works for most people and has English is Busbud. (I detail why these are the best sites for Brazilian bus tickets here.) 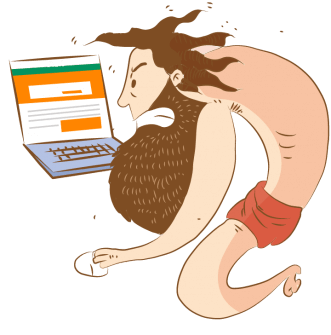 Yes, we know. They’re generally impossible for non-Brazilians to use. That’s why we recommend booking through either of the third-party sites above.

6. Can I buy bus tickets directly at the bus station in Brazil? Should I?

You absolutely can buy tickets at the Brazilian bus terminals directly, where you’ll encounter a maze of ticket windows loudly advertising their destinations.

Show up a bit before your bus leaves, and if you’re on a popular route between major cities you’re still likely to find one bus or another. But it’s nice to reserve a seat ahead of time so that you’re sure. Plus that way you can decide which company you want — for example one offering internet or larger reclining seats (semi-leito).

Yes. Thank god. Smoking is prohibited by law on all Brazilian buses.

Generally the intercity Brazilian buses are very clean at the start of each trip. At most, you might find a discarded food wrapper lodged in some hidden spot that the cleaning staff has missed. But we’ve generally been happy with the level of cleanliness on Brazilian buses.

If you’re boarding the bus at a midway point (likely a smaller city) on its journey, you could possibly end up in a seat that someone else messed up at the beginning of the bus trip. Alert the bus staff if there’s a serious issue.

The on-board toilets likewise start the trip clean. Generally most people wait to use the toilet at the rest stops, so the bus toilets don’t get much if any use.

9. What should you do if someone is playing music too loud on a Brazilian bus?

Brazilians don’t always show the utmost respect for their fellow human beings, and this is a good example. Somehow, some Brazilians just can’t quite fathom that not everyone else in the bus wants to hear their music, movie, video game, whatever.

Fortunately, this is the worst behavior that you’ll probably encounter, and even this doesn’t actually happen all that often. Ask them to use headphones (fones de ouvido) or to just be quiet (silêncio) and throw in a please (por favor) and you should be fine. If not, you can ask the bus staff for support, or remind them that the decree number 2,521 of March 20 1998 stipulates that they can be thrown off the bus by the staff for failing to turn off their music.

Not as bad as you’d think. They’re generally pretty well separated (sonically, atmospherically) from the seating areas (though it’s always wise to choose seats that are not too close just in case) and clean enough, with a pressurized system for flushing similar to those found when flying.

Buses generally stop every three hours or so for a break with plenty of time to use the toilets in the rest areas, so the toilets on board Brazilian buses generally and fortunately don’t get much use. But it’s nice to know that they’re there, especially for foreigners experiencing traveller’s diarrhea due to the water or food.

11. Is there wifi on Brazilian buses? And how fast is it, and does it work?

Many Brazilian bus companies advertise that their buses have 4G connections and use this to offer wifi to passengers at no additional charge. In actual practice the connection tends to vary according to where you are on the highway. I’ve been able to use it to get a bit of work (like writing for this site) done while on Brazilian bus trips, but it’s a bit limited.

More questions? Drop them in the comments and we’ll do our best!

Brazilian vs. European Portuguese: Key Differences to Learn in Grammar and Vocabulary