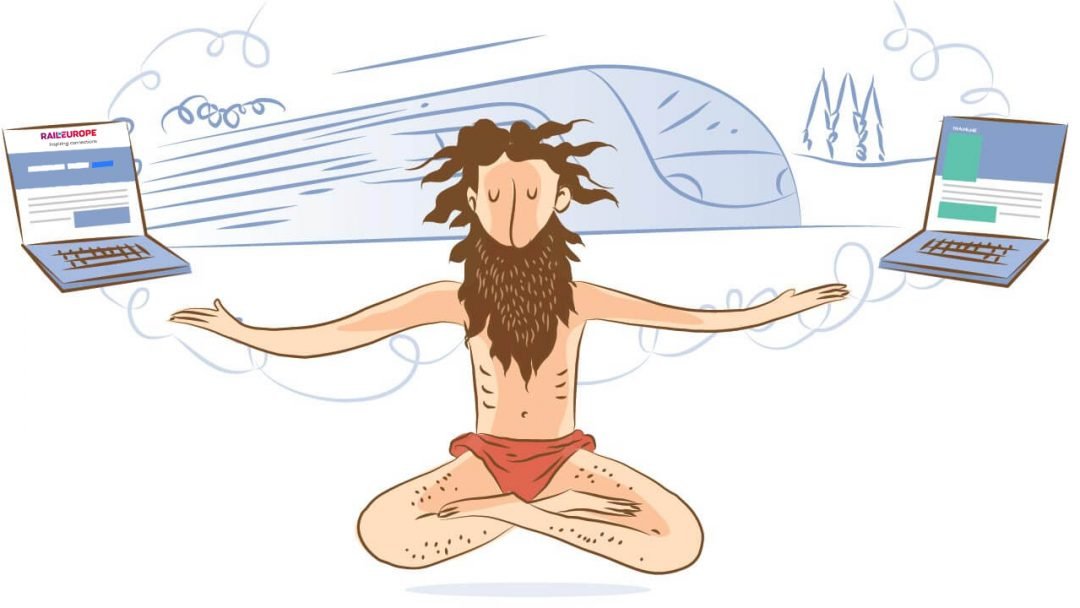 We ran dozens of pan-Europe searches on our two favorite train booking platforms, RailEurope (formerly Loco2) and Trainline, and compared the results. The goal: determine which booking experience is smoother and results in better and cheaper routes.

We have found that both of these platforms are better than booking directly from mainland Europe’s national train companies. They charge the same base prices for any particular train ticket, and often find better routes, which saves money. The catch: they add on small booking fees of a couple of euros. But overall they’re far easier to use than most European train booking sites, which can cause issues, particularly for those outside of a particular country, and even be impossible to use with foreign credit cards.

But which is better, Trainline or RailEurope?

Both platforms are great — much better than the purchase experience on national European train operators’ sites.

Our overall preference is usually Trainline. In our tests of complex trips it finds cheaper routes fewer stops to change trains, and it offers more options — like the French high-speed budget trains (Ouigo). It also offers bus and bus/train combo options that in certain cases are big money savers. In many of our test cases, its smarter routing engine could save travellers hundreds of euros on a pan-European train vacation.

Check out ticket prices on Trainline

But RailEurope is nearly as useful. Its interface is just as simple and we like the small map illustrating possible routes in search results. Also, if you’re buying a large number of tickets all at once, the small flat booking fee per basket (rather than Trainline’s small percentage fee) could make it just slightly cheaper, depending on your journey.

First off: Why Either One of these Platforms is Far Better than National European Train Company Websites

As we’ve covered in our previous studies of how European train platforms compare, both RailEurope and Trainline are far more useful than booking directly with the national train companies like SNCF Connect (France), Bahn.de (Germany), Trenitalia (Italy), Renfe (Spain), and the rest.

First and foremost, while they offer the exact same prices for any particular route, both platforms can actually quite often save you money over the companies themselves for international train trips with changes. This is for two reasons:

Also, both platforms are very intuitive and easy to use — which is hardly how we would describe the error-ridden and poorly translated European national ticketing websites.

We ran a test of over two dozen of the most popular Europe train routes such as these routes suggested by Eurail, as well as some of our favorites and some off the beaten path.

For simple trips within a single country or international trips that didn’t require changing trains, both platforms generally performed great, offering the same rates as the national operators as described above.

Trainline offers better and cheaper routes, as well as more options like France’s budget train lines
But for more complex trips, Trainline (formerly Captain Train) seemed to have a smarter search and routing engine; it offered us much better results. For international trips like Dortmund to Warsaw or Rome to Nice, Trainline came up with cheaper routes that RailEurope didn’t offer. And Trainline also offered a cheaper route in France from Paris to Marseille on France’s “budget” high-speed train system, Ouigo (this site generally doesn’t work with non-French credit cards). Trainline’s total access to the ultra-cheap Ouigo system is a huge advantage over RailEurope, which doesn’t have it at all, and for the non-French is often the only way to book such tickets.

And from what we’ve seen, the question most people really wonder about is: Which will get me the cheapest fare: Trainline or RailEurope?

For most cases (simple trips between popular cities), Trainline and RailEurope offer the same fare. But Trainline’s usual 3% booking fee generally works out to less than RailEurope’s usual flat €6.95 euro fee, so Trainline generally is the cheaper option by a small amount.

An Example Test Case In Detail

On our search for trains from Paris to Venice, Trainline suggested an option that takes 10:18, costs €58.90, and involves a 1:11 stop in Turin. RailEurope’s cheapest selection was an 11:42 trip that would involve a 38-minute stop in Basel and a 59-minute stop in Milan, and would cost a total of €106.90 — almost twice that of Trainline! (RailEurope’s shortest trip was 11:17 and also involved two changes.) Manually entering the route info from Trainline into the RailEurope search engine for each leg of the trip brought the RailEurope total price down to €68.90. (For comparison, searching in French on SNCF Connect showed a cheapest route with one change totalling 9:59 and €119. And Trenitalia’s cheapest suggestion was an 11h23 trip with two changes totaling €201.90. Bahn.de showed a 10:11 trip with one change but couldn’t offer it for sale on its site.)

Again, both RailEurope and Trainline are offering their tickets at the same prices as the national rail lines’ prices on any given day; it’s just that Trainline’s routing engine is smarter about finding useful, cheap routes, and that Trainline has access to the full range of budget options within these systems.

Results were similar when we instead chose the shortest trip options from each platform (instead of focusing on price). In most cases the proposed routes were of similar length, arriving within 10 minutes of each other (often they reported just slightly different timings for the exact same trains).

Other Reasons We Prefer Trainline Over RailEurope

Aside from generally saving us money on trips, there are other reasons we think Trainline is still the best mainland European train ticketing platform:

There Are a Few Advantages to RailEurope, However

Both Trainline and RailEurope now have small booking fees. Trainline’s booking fee tends to be smaller, but the company is not very transparent about what these fees are and for whom — you only find out exactly what your particular booking fee will be on the final payment screen, which is hardly fair or ideal. That said, this fee is quite small and well worth it; in our tests it was 0%—literally free—on up to about 4% of the ticket price, and it seems to depend on the IP location of the computer doing the purchase and the type of ticket. Most commonly the Trainline booking fee seems to be about 3%.

RailEurope is much more transparent and has a standardized per-basket booking fee that varies only depending on the currency you’ve chosen: £5.95, €6.95 or $7.95. So for most tickets Trainline will have a slightly lower fee, but if you’re buying tickets all at once with a total cost of over €230, RailEurope may be cheaper. Very cheap train tickets (those costing less than $15 / £15 / €15 / CA$ 20 do not have a booking fee on RailEurope.

And there are a few other small things that I personally prefer about the RailEurope interface:

Note that the RailEurope site has completely changed technology after the French SNCF (official railway company) bought the train booking platform Loco2 in 2017. RailEurope subsequently transitioned to using the technology it acquired from Loco2 (which was great) and so now RailEurope essentially works like Loco2 used to. So if you tried RailEurope pre-2017, note that the new experience is nothing like the old (terrible) version.

Both sites rather prominently show the carbon footprint of each train route you consider (RailEurope expresses it as carbon saved compared to flying; Trainline just shows the carbon footprint of your trip). But we found it odd that they each calculate rather different results for the same trip. For example, a London-Paris Eurostar is shown as using 5.17 kg CO2 on RailEurope, whereas Trainline gives 4.2 kg CO2 for the same exact ticket.

Obviously this is a difference in how the calculation is made, as where you buy your tickets doesn’t affect your carbon footprint. Ecopassenger.org estimates this same trip at 15 kg CO2 — but in any case the point is that the train is far better than driving (48.4 kg CO2) or flying (122.1 kg CO2). Of course, it’s faster and more fun too.

Wrap-Up: The Best Platform for Online Booking of Your European Train Escapades

The top performer in our tests for purchasing mainland European train tickets continues to be Trainline. It offers the smartest and cheapest routing options for trains out there, as well as add-on options and comparisons to pan-European bus routes. In short, it’s easy to use and can often save us a bit of cash.