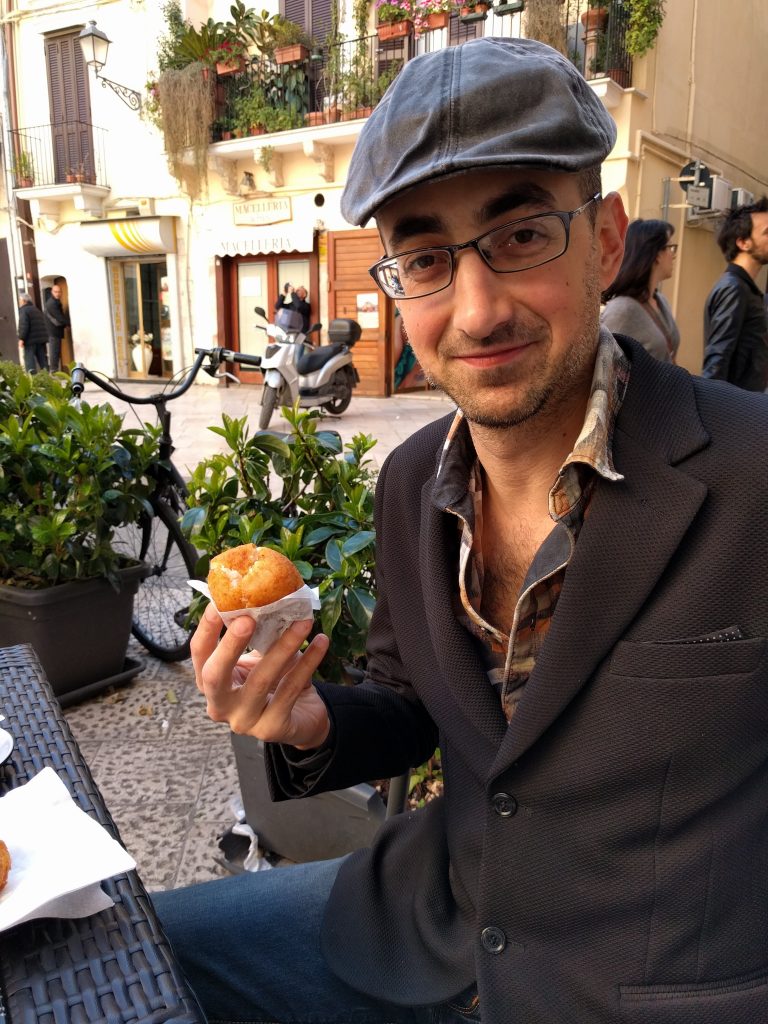 If you want to joke, flirt, and gripe with the locals in Sicily, you could do so in Italian. But if you manage to do so in Sicilian you’re going to have way more fun.

Sicilian is the language of the island of Sicily. Some refer to it as a “dialect” — but, prior to the imposition of Italian as a “national” language, Sicilian developed in parallel to Italian. So don’t think of Sicilian as an offshoot; it is rather a much-maligned and marginalized sister. (Here’s the fullest explanation of the difference between a language and a dialect.)

Sicilan speakers generally learn the language from their parents and then learn Italian from television, school, and other situations. Almost nobody attempts to study it as a foreign language, except for weirdos like me. And now, you.

I recently visited Sicily and employed my Minimalist Language Method to ensure that I could hit the ground with just enough vocabulary to be able to properly bullshit with the locals. What follows are the phrases that I learned, along with their pronunciations.

1. Introducing Yourself in Sicilian: Montalbano Am I

Sicilians often plug in their verbs at the end of their phrases, including when introducing themselves. This habit has been popularized in Italian culture through the popular TV and literary detective character Montalbano, who famously declares:

Of course that’s just Italian with a Sicilian structure. In true Sicilian he would say:

And following the same pattern, when I introduce myself in Sicilian and want to simultaneously make it instantly clear how well I understand the local culture, I say:

You can also use the verb to indicate your nationality. 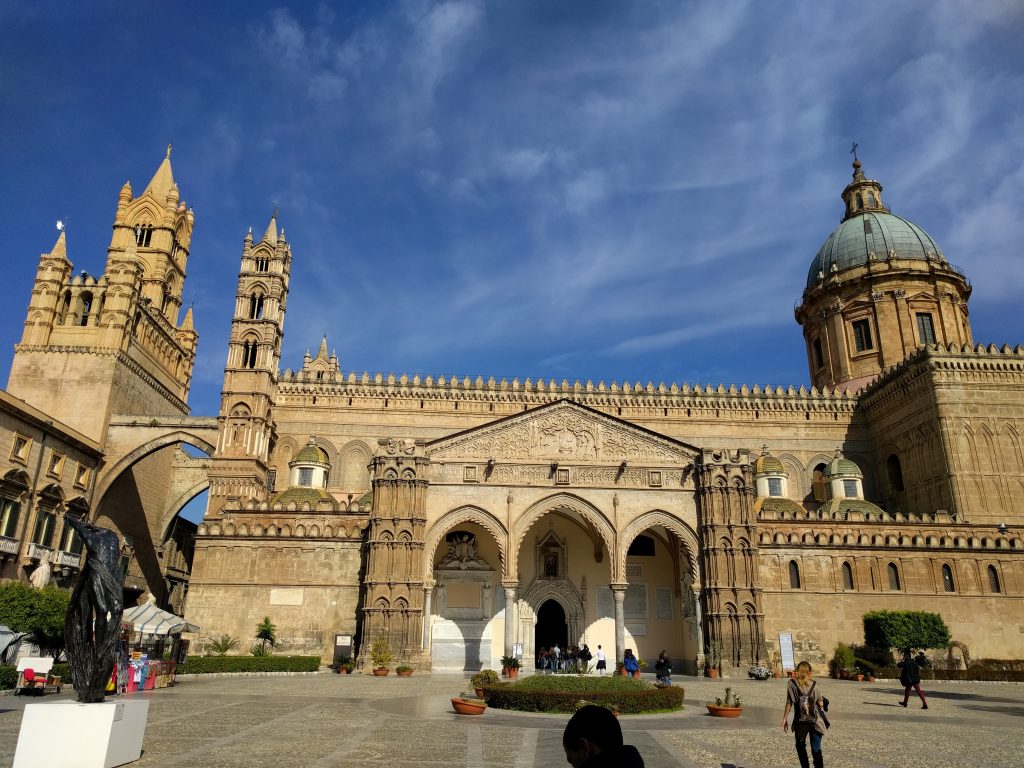 2. Respond to Suspicion of Sicilian-Speaking Foreigners

If you speak even just a little bit of their language, Sicilians will love you for it. But … they may also be suspicious as to why you would bother to learn such a “useless” language (this has also happened to me when speaking Galician or Serbian).

For all your efforts, you’re likely to get an incredulous, wary “But why do you speak Sicilian?” at some point. Certain Sicilians may even think you’re making fun of them by trying to learn a few phrases of their oft-disrespected language.

I have been advised that it’s wise to put these people at ease with a lie: the invention of a Sicilian grandfather.

3. Ordering Wine, Spleens, and Other Necessities

Don’t overdo it on politeness; Sicilians certainly don’t. But it can nevertheless be useful to have the equivalent of “please”.

You can similarly employ pi favuri to ask for food.

Meusa is the Sicilian word for “spleen”, and yes, that’s what will be in your sandwich. The Italian word is milza. The most famous place to order this in Palermo is Porta Carbone.

This Sicilian take on falafel is another popular street food — it is bread with fried chickpea balls.

You may be familiar with the plural form, cannoli. These are tubular Sicilian pastries consisting of fried dough wrapped around a creamy filling. A famed place to eat these in Palermo is Spinnato.

These are another popular street food; they come stuffed with meat, cheese, and veggies. They are available everywhere in Sicily, and often in Italy and throughout the world.

Which is correct: Arancino, arancina, arancinu, or arancini?

The singular form of this stuffed fried rice treat is generally arancina in the west of Sicily (including Catania) and arancino in the eastern part (including Palermo). Choose your side, and then prepare for a fight, because they both fiercely claim to be “correct”. The Accademia della Crusca, the national institute for the safeguarding of the Italian language, has even stepped into the fray about what should be the proper term beyond these regions. Further, the first Sicilian dictionary,Giuseppe Biundi's Dizionario Siciliano-Italiano, claims that it should be arancinu, which makes sense, given the tendency to towards the U sound in Siclian. One can likewise dispute whether it should be arancine or arancini in the plural.

The most common toast is:

There is also wedding toast that has been adopted and is used everywhere, in any situation.

This obviously shows the Sicilian baby-gender preferences; one wishes that the new couple may birth little male Sicilians in order to continue the family line.

5. Owning to Your Mistakes in Sicilian

When you’re attempting to fake your way through a language that you don’t speak, you’ll inevitably fuck things up. It’s thus important to know how to backtrack.

An anonymous adviser on the island tells me that the later phrase is not used much by Sicilians themselves, as they do not admit to mistakes.

6. The Most Meaningless but Useful Sicilian Word

If there’s one word you should know in Sicilian, this is it. It gets thrown into just about every Sicilian sentence, so when you’re not sure what else to say, use it.

After so much wear and tear, the word basically means nothing in most contexts. Literally, it means “dick” and corresponds to the Italian cazzo. It can add emphasis or just be used as filler. Italian speakers have also adopted minchia, however. Note that both words are a bit vulgar. There is also a more grandmotherly interjection.

Beauty would seem to have a low bar in Sicily; for nearly every thing and situation you can show your appreciation with this phrase.

The double D is a Sicilian consonant somewhere between an N and a D. Explore how your tongue curves differently when making an N and a D to find the right spot.

If you see a beautiful female thing or person, you say:

The contrasting experience is annoyance.

The Italian equivalents are seccatura or noia.

Confusingly for those from pretty much anywhere else, Sicilians give one quick nod of the head up to indicate “no”. This should be accompanied by a clicking sound. Here’s a few examples.

Worse, some Sicilians also negate verbally in a way that’s unlikely to clear things up for foreigners.

There is also, fortunately, a more simple word.

When you really want to insult a Sicilian man, you suggest that his woman has slept around.

You don’t necessarily employ the word “Roger” every time you see your friend Roger. You might well say, “dude”, “what’s shaking, dickmunch”, etc.  One can be similarly vague and informal in Sicily.

This person is literally the witness to your marraige or the baptizer of your baby. Cumpare is also employed to get someone’s attention or in a spirited attempt to get someone to wake up and see the light. As with the black American dialect’s “nigga please“, cumpare is most archetypically used to express incredulity.

Sicilian’s expression of surprise is as follows.

The similar expressions in Italian are ma va’, suvvia, dai.

Similar to the Neapolitan language, when speaking Sicilian you must frequently comment on things not working out so well.

futtitinni — fuck it, it’s pointless, forget about it, it doesn’t matter (mildly vulgar)

Sicilians are loathe to just meet up in a specific place and do a specific thing. They’re much more likely to propose a vague jaunt about.

Sometimes Sicilians will use the Italian equivalent, piedi piedi, but Italians don’t generally use this.

15. Advice that No Sicilian Actually Heeds

Sicily is an island full of quite talkative people, but they have a saying that suggests behaving quite the opposite.

A big thanks to Sicilian native and expert teacher, Alessandro Bontempo for helping me learn these phrases. I have long taken Italian classes with him via Skype by signing up on Italki, and you can too. He’s experienced, delightful, and able to efficiently explain the most confounding grammar and usage questions that I spring on him.

You can also check out this more guidebooky list of Siclian words and phrases, as well as this fun guide for Italian speakers wanting to speak Sicilian.

For English speakers who want to learn Italian, of the many books I’ve used, by far the two best are Complete Italian (a beginner-to-intermediate communicative style guide) and Soluzioni: A Practical Grammar of Contemporary Italian (an intermediate to advanced level guide and workbook).